My humble attempt at coming to terms with modern technology

An optimistic, happy-go lucky person who hails from Kerala, the 'Gods own Country'. As a passionate marketeer and an avid reader I enjoy sharing my views on Books, Social Issues, and Public Speaking.

The theory behind public speaking! 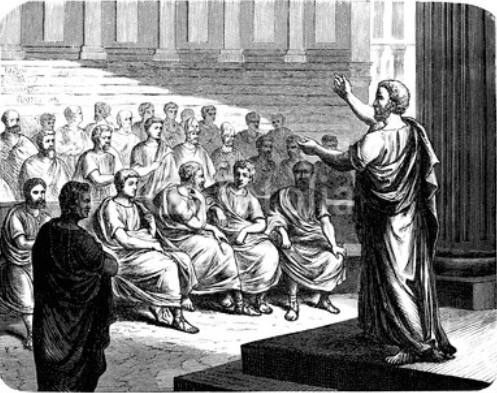 I feel public speaking is an art as well as a science. It's a skill that can be mastered with practice. I know this because I read about communication theory - the theory behind public speaking. With a keen interest in public speaking, I first started out by taking an online course. Yes, an online course on public speaking! In fact, it turned out to be a very interesting course and that's when I first got introduced to the theory behind communication. The professor started the course with the origin of public speaking and spoke about the different view points around the art of public speaking, including the Rhetoric. The first assignment was to record a speech and upload it on a YouTube channel to get feedback from others. I practiced my speech, for what it seemed a zillion times, before I took my first shot at the video recording. My first attempt - I absolutely hated it! I deleted the video, tried again - not once or twice, but multiple times. At the end of that long and tiring tryst with speech recording, I got a decent version of my speech which I uploaded to my YouTube channel. I did get a some good comments from my peers, but as time progressed, I couldn't follow through and had to discontinue the class.

It was almost after one year that I got a chance to be a Toastmaster and enjoy the benefits of being part of a group that truly wants you to succeed as a speaker. But as I got more serious about public speaking, I started reading about the psychology of public speaking. The Greek philosopher Aristotle, one of the founding Fathers of communication theory talks about 3 pillars of communication - Ethos, Logos and Pathos.

Each of these components are important - these 3 in conjunction can make your speech impactful. Let me explain this with an example: I just completed reading a book called 'Talk like TED - The 9 public speaking secrets of the World's Top Minds' by Carmine Gallo. I love the anecdote Carmine uses to substantiate Aristotle's theory:

Bryan Stevenson, a civil rights attorney and the executive director of a non-profit group called Equal Justice Group, got the longest standing ovation in the history of TED. After his speech, the attendees donated a combined $1 million to his non-profit. The Reason? Bryan Anderson knew how to move his audience into action (you should absolutely go and watch that TED talk and read the book, if possible). Out of his 18 minute speech, the first 5 minutes (almost one third the time) was taken up by a story - not just any ordinary story, but the story about his grandmother, something everyone in the audience could relate to. This made it easier for them to connect with him on a personal and emotional level (Pathos). He introduced his first statistic about how meeting people are incarcerated in US prisons and the % of those who are poor and/or African. Data supported his theory (Logos), but that was not enough. People have to trust you and they have to be ready to go on a journey with you. Talk about Ethos - Bryan is a civil rights attorney, people know that he is one of the best in his field and that he knows what he is talking about. With the right combination of Ethos, Pathos and Logos, and a whole lot of practice, anybody can awe an audience or move them to action. Agree or not?

Action item: Consciously listen (and take notes, if needed) to some of the most viewed and sought-after TED talks and try to identify how each of the great speakers have used these 3 pillars to make their speeches more impactful. It would definitely be a great learning in our public speaking journey.

Fun fact: Do you know the technical term for the fear of public speaking (or speaking in general)? It's Glossophobia and it's the top most feared experiences world wide! And the only proven way to get rid of it is by actually getting in front of an audience and facing it head on!

An optimistic, happy-go lucky person who hails from Kerala, the 'Gods own Country'. As a passionate marketeer and an avid reader I enjoy sharing my views on Books, Social Issues, and Public Speaking.